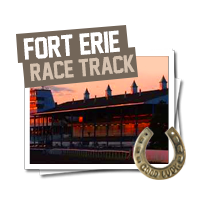 The Mohawk Raceway opened to a crowd of 4,338 people on April 26th, 1963, after the Ontario Jockey Club identified Campbellville as an ideal place to build a track. Since its inauguration, Mohawk has consistantly renovated and upgraded its facilities, regularly attracting significant international harness racing events, including the Breeders’ Crown and the International Drivers Competition.

Mohawk Raceway features a racetrack made of crushed limestone on top of a taprock cushion. In 1998, the circumference of the track was lengthened from 5/8th to 7/8th of a mile, much to the delight of both competitors and fans. The home stretch measures 1,095 feet long with a width of 85 feet. Space for up to ten starters is available behind the gate.

The lineup of significant races at Mohawk Raceway offer major compeition and some of the richest races in Canada. The North America Cup, Canadian Trotting Classic and the Metro Pace are races with typical minimum winnings of half-a-million or greater. Other major races include the She's A Great Lady Stakes, Canadian Pacing Derby, Fan Hanover Stakes and the Maple Leaf Trot.

The North America Cup is a one-mile stakes race for three-year-old pacers with a purse of $1,000,000. This race started in 1984 at Greenwood Raceway and moved to Woodbine Racetrack before landing at Mohawk Raceway in 2007. Thinking Out Loud owns the record of 1:47.4, which was set in 2012. The most successful driver is John Campbell, finishing first six times, including four consecutive victories from 1994-1997.

The Canadian Trotting Classic is a stakes race for three-year-old trotters with a purse of $686,000 at a length of one mile. This trot features fierce competition, with Windsong's Legacy being the only horse to win both the Triple Crown for trotters and the Canadian Trotting Classic in 2004. Horses from the United States typically dominate this event.

The Metro Pace is among the most important races for two-year-old pacers, boasting a purse that has recently reached as high as $1,000,000 – the richest for pacers of this age. Winners of this race tend to be heavy favourites that destroy the field or little-known, talented horses beginning to fullfil their potential. This results in shocking upsets, including the recent 20-1 longshot winner Simply Business.

Find the best odds for your horse online and place your bets within minutes !