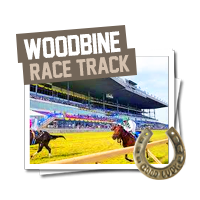 Woodbine Racetrack is the granddaddy of them all when it comes to horse racing in Canada. Located in Toronto, Canada, this mecca of horse racing opened on June 12, 1956. Woodbine is the only track in North America that has the facilities to stage thoroughbred and standardbred racing at the same time. From the running of the Queen’s Plate, the first jewel in the Canadian Triple Crown, to the world reknowned Pattison Canadian International, Woodbine is a sanctuary for horse handicapping fans.

Offering international stakes racing, that attracts championship caliber horses from all over the world, thoroughbred and harness betting action is available live at Woodbine, at an OTB Ontario venue or, simplest of all, through our top rated racebooks. Check out this track....

A track, within a track, that's within a track - now that's Born in Canada innovation at it's finest eh? Woodbine is home to many Grade 1 stakes that carry close to $20 million in purse money annually. Highlighting the list is the Canadian International Stakes, the historic Queen’s Plate, the traditional Woodbine Mile, and the E.P. Taylor Stakes championship thoroughbred race.

Few crown jewels shine brighter than the Kentucky Derby of the Canadian Triple Crown - The Queen's Plate. With its first post in 1860, this race was inaugurated by Queen Victoria and is the longest continuously ran stakes race in North America. Run at 1 1/4 miles "The Plate" offers a prize purse of $1 million.

First run in 1956 and open to fillies and mares, the E.P. Taylor Stakes race normally offers a half million dollars in prize money and goes over 1 1/4 miles on the E.P. Taylor turf course at Woodbine. It's a huge bonus that the winner takes a major step towards the Breeders' Cup Filly & Mare Turf battle that carries a $2 million prize purse later in the fall.

Officially the Ricoh Woodbine Mile, the race draws top horses from around the world, including the likes of Wise Dan, two-time defending US Horse of the Year, who has won the last two versions of the Woodbine Mile. Offering a $1 million purse (since 1999) the winner of this turf race also receives a place in the starting gate for the Breeders' Cup Mile.

Find the best odds for your horse online and place your bets within minutes !